Another update: It's all good!

Awesome! Everything including the Trackball works. I'm going to finish my little boards and submit the Gerbers for fabrication :)

One thing that I forgot was that these trackballs were meant to be used in small phones to navigate lists and grids. As such they update positions at a fairly slow rate (about 10/revolution). To compensate for this I did something kind of neato, there's a configurable default scrolling speed defined in rules.mk, this speed is then multiplied by the active layer number. Modifiers, Layers and a few other things go into modifying this number, but one is for sure. Hold a layer for speed! 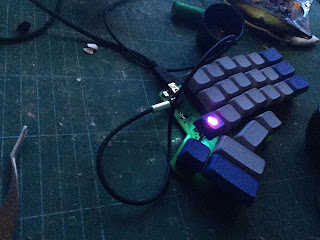