Let's get the updates out of the way:
- JLC fucked up the front BuzzSaw silks so those are going back into production. If you can deal with a pure white front side (the Asphalt texture, not the IKEA stuff) shoot me an email and I'll work something out.
- Ginni, FaunchPad, Gergo, and GergoPlex are working just fine. Orders are being filled right now
- Kailh order came on in, Georgis is going out again
- Sprit restock should be next week. Unless it gets stuck at customs for a month again. Fingers crossed.
- Stickers should be coming in soon and be added to all orders :) 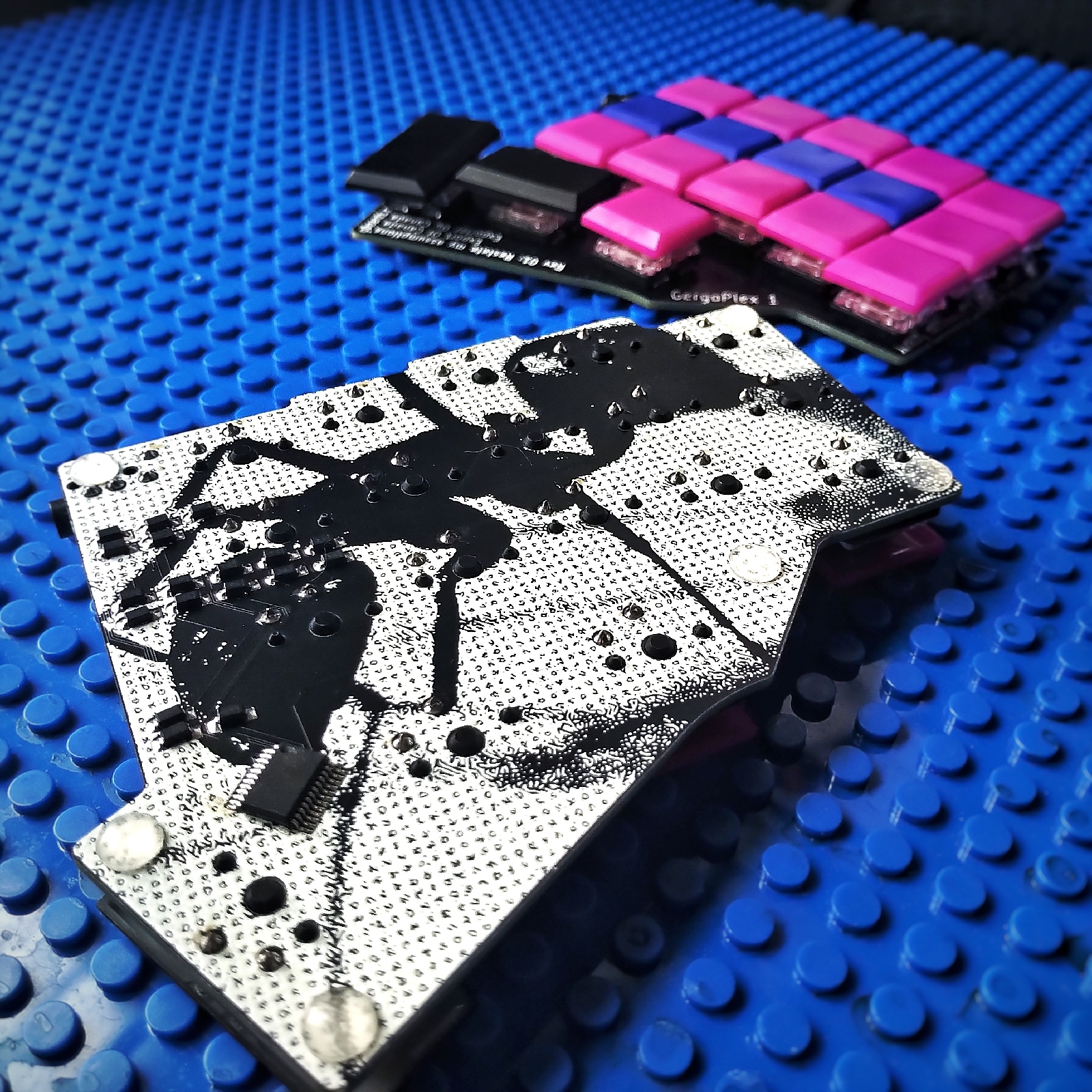 u/ataraxy on Reddit pointed out that there were some major differences between the initial post about GergoPlex and what it eventually became. I thought I'd use this post to explain just what went on there.

So the original idea was to make a bigass flight of XanaDocs and make a big cohesive post about ergonomics. Mostly something I could point people to with sources and all that stuff instead of having the same conversation about why using a TKL isn't a good time or how single-board-ortho is worse than row stagger. That never materialized as things got very busy around here with boards and orders. Maybe one day. 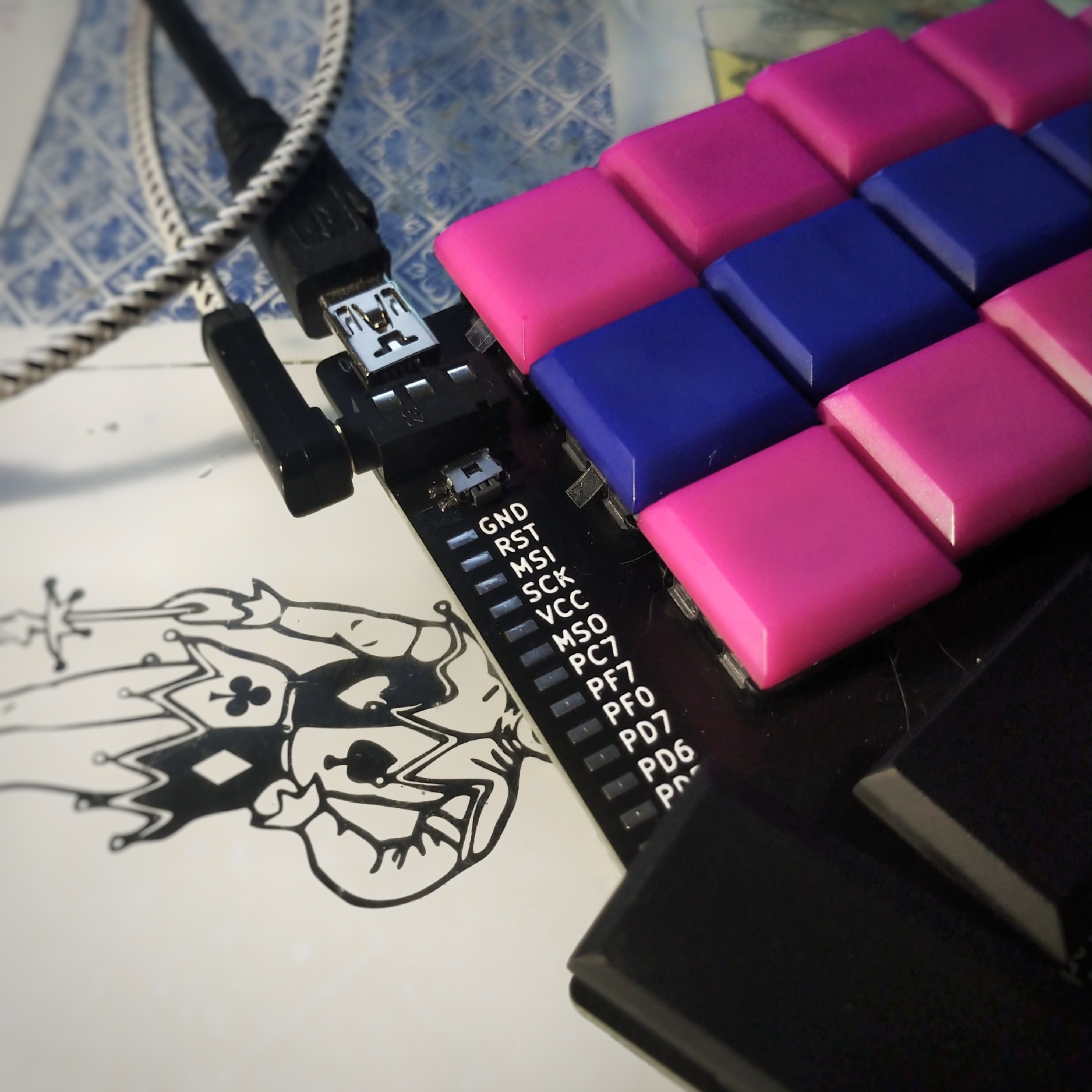 Instead, the project turned in a new direction. Every year (assuming gBoards doesn't tank) I'm going to 'fork' the current iteration of the Gergo line and develop it from there. This is NOT to say that Gergo or GergoPlex will disappear, they will still have their revisions and updates. But this process will allow me to push on with what I feel is the next step in the line (and that doesn't mean fewer keys, Ginni is a thing lol)

Anyway, once I finally found time to sit down and design the board itself I realized a few things since the initial conception and after a year of Gergo.
- Having the inner 1us lead to a _ton_ of wrist motion between the mods and the inner columns
- The weakest finger ends up doing a lot of work
- LEDs add no real value and add complexity to a board. I'd rather have lower costing boards instead of a more saleable board.
- My understanding of augmenting layouts with chording (how much is too much) increased a ton.
- Users will undermine themselves

So let's walk through these. The main issue with having the 1us and the outer mods is that it promotes wrist motion. I heavily utilize those inner 1u mods and a side effect of this is that the wrist is constantly pitching back and forth. It doesn't seem like much but over months this can add up. This leads to the main issue with pinkies, they're very weak! The outer 1.5us are almost exclusively used for mods, and there's a ton of work placed on them (as they're not only responsible for the mods but QAZ and even WSX if the hand is shifted to inner 1us!). This in my eyes is unacceptable.

As far as LEDs, I can't expect a user to assemble a bunch of tiny RGB LEDs and debug that. It also adds cost, complexity and requires PCBA services for these boards. A big draw of my boards is that they're a fun way to work on your SMD skills and get a keyboard out of it to boot. This is half of the fun of keyboards, the assembly and debugging process (whether anyone will admit that is another story), by doing PCBA that disappears to just another kit keyboard.

Chording has been the big development of this year. Some of you may remember ErgoTaco, well that's all Ginni is! The difference is that Ginni can be used (not that any sane person would, but you're probably not sane if you're reading this!). Joking aside, there's been a ton of effort and thought put into chording and how that works to augment the typing experience. I believe that this is extremely important to the development of ergonomics, but a line must be walked between understandability, usability, and ergonomics. Go too far into any one of these categories and bad things will happen. Look at stenography, extremely ergonomic and efficient, but it takes years to learn. Georgi tries to take some of that and package it down for us mere mortals to use via a modified QWERTY engine. Everyone can use a 104 with little to no knowledge, but ergonomics and efficiency will take a massive hit. A balance must be made.

-- Germs Law
The smaller a keyboard is, the more ergonomic it becomes but the complexity of the device skyrockets to the point of impracticality.

Lastly, (and most importantly) users will undermine themselves. If you give me a rope, I'll find a way to hang myself with it. This is the design philosophy of GergoPlex: Just don't give the rope. By actively being user-hostile, the user is left to find a way to manage and adapt. Similar to learning to live without a numrow it comes with time and usage. If this seems a little extreme, I'm not stopping running Gergo anytime soon! I've been typing on this GergoPlex all day, and the first 3 hours were mixed with a good amount of mashing my fingers into a desk. Now that I've stopped doing that it's pretty damn comfy!

So that's what lead to GergoPlex, kind of in a weird way. :) 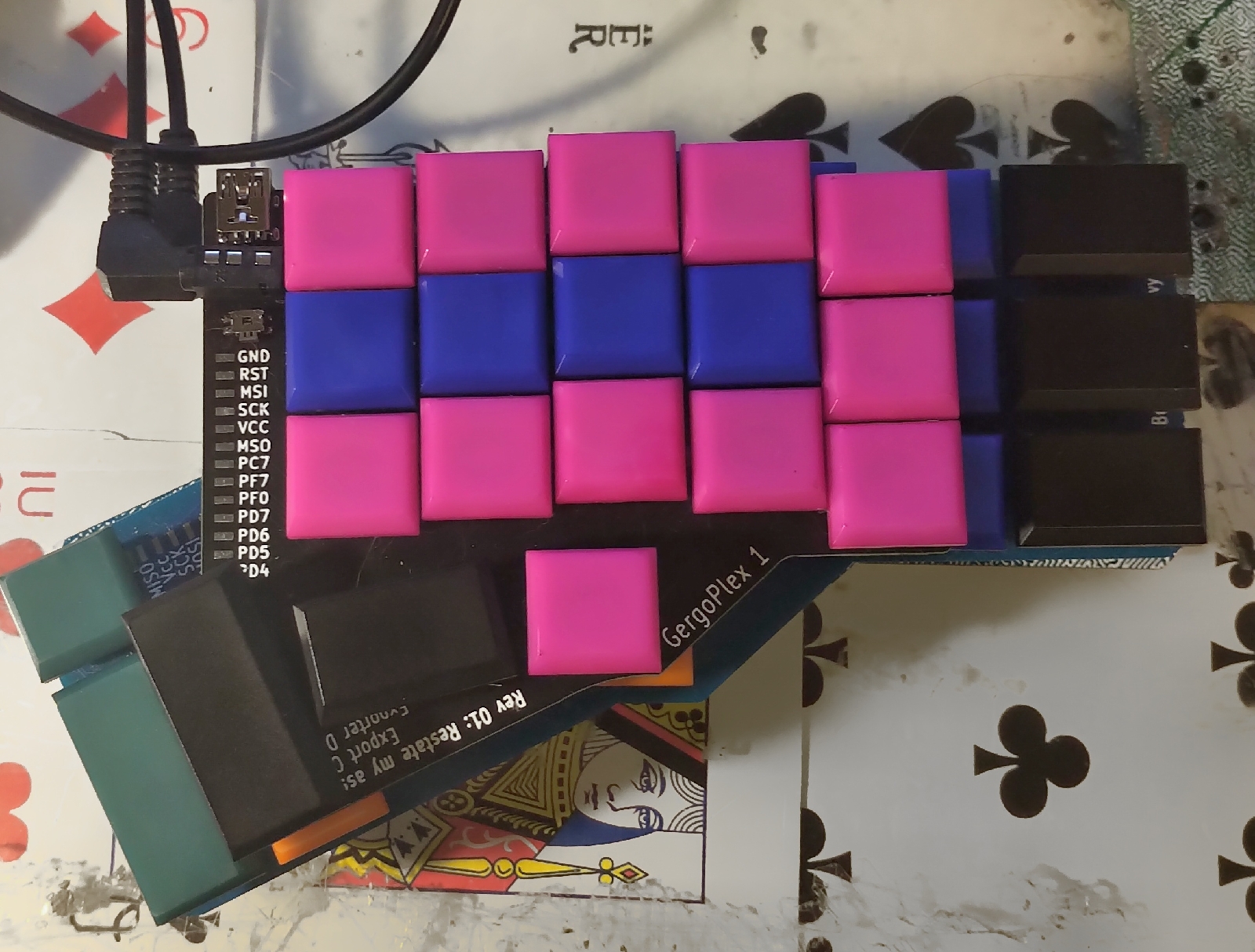 Anyway, thanks for keeping up with me this year, let's see how GergoNext develops! Stay tuned!